Lessons
to be Learned from Israel's Airport Security 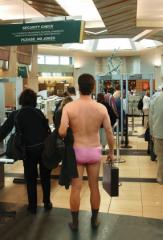 Do you ever feel like an idiot standing in line at the security checks at the airport (kind of like the dude in pink underwear pictured to the left)?  Between taking off your shoes, coat, belt, sweater... hey, you might as well completely strip down!

Today I would like to stray a bit from the topic of car rentals and discuss an issue that is on everyone's mind - airport security. It's no laughing matter that many of us dread flying... not because we are scared of the actual flying part... rather, we abhor the idea of having to spend hours upon hours going through the gong show of security checks.  For lack of a better word, the process is simply...well... annoying!

I have travelled back and forth to Israel's Ben Gurion airport many times and have always been fascinated that their airport security is so efficient, quick and sophisticated.  You rarely have to wait in long lineups, passengers move through various security processes quickly and ultimately, as a passenger, you feel really safe!

Last year, while my family and I were visiting Miami over Christmas, I remember watching CNN which was all ablaze with footage of the Flight 253 would-be bomber Umar Farouk Abdulmtuallab (the flight from Amsterdam that was destined for the States).  On one of the segments, an Israeli airport security specialist was being interviewed.  He was completely aghast (along with much of the rest of the world) that such a thing could have happened - that the bomber was not discovered before getting on the plane.  The interviewee's words that still ring clear in my mind are, "This would NEVER have happened in Israel".

I recently read a fascinating article called The 'Israelification' of airports: High Security, Little Bother'.  In this piece, author Cathal Kelly frequently quotes Rafi Sela, the president of AR Challenges and who has worked in airports around the world.  He stresses how North American airport security systems in particular have loads to learn from how things are done in Israel.  In essence, the suggestion is made that there should be an adoption of 'Israelification' - " 'Israelification' - a system that protects life and limb without annoying you to death"  in all airports.

Sela describes the various layers of Israeli airport security which should serve as a world-wide exampl:

Do you know why Israelis are so calm? We have brutal terror attacks on our civilians and still, life in Israel is pretty good. The reason is that people trust their defence forces, their police, their response teams and the security agencies. They know they're doing a good job. You can't say the same thing about Americans and Canadians. They don't trust anybody," Sela said. "But they say, 'So far, so good'. Then if something happens, all hell breaks loose and you've spent eight hours in an airport. Which is ridiculous. Not justifiable.

So, the moral of all this?  Airports around the world have a lot to learn from Israel's advanced, proficient and reliable security system.  Think about how much happier you'd be as a passenger if you didn't have to suffer through hours of security checks?  Imagine not having to be at the aiport hours and hours prior to an international flight?