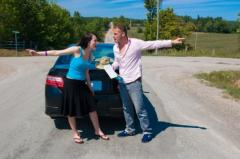 you ever been on a road trip and come close to drop-kicking your co-passenger? While you may have had the best of intentions when renting a car and planning the trip with your best bud, fiance, spouse or children the final result may not have been so pleasurable. There is nothing worse than driving to the tune of a passenger telling you, "Turn left here... I mean, no turn right, actually, oh man, we missed the turn"; or "Are we almost there yet?"; or "I'm hungry, stop the car... and hurry up because now I have to pee"; or better, yet, "You are driving like a maniac, SLOW DOWN".  If you have suffered from any of the above threats or annoyances, well, you are not alone!

According to a new poll from Continental Tyres, in which a large number of British drivers were questioned, nearly 4 million expressed that they would prefer to travel on their own rather than have to put up with aggravating passengers.  This article in Travel News explains that out of 4,000 motorists questioned, 30 percent more people aged 50 would prefer to drive solo when compared to their 20 year-old counterparts.  Do we become more grumpy and intolerable with age?  Most definitely!  The study also found that passengers agitate the driver at least 3 times during one trip and that it only takes 6 minutes for the average driver to become so annoyed that they lose their temper.  In addition to this and according to the study,

The single most irritating passenger was the notorious ‘backseat driver’, whose nasty habits included the inability to keep their thoughts, hands and feet to themselves. They also depressed phantom brake pedals, braced themselves in panic at intersections and felt it necessary to provide a running commentary on the driving conditions. The next biggest offender was ‘the fiddler’, who habitually adjusted air conditioning, radio stations and anything with a button.

I would be lying if I claimed that none of the above ever happened to me.  But, to be honest, I think I am more of an 'annoyee' than the one who is being annoyed.  Here's the thing... my husband is from Caracas, Venezuela.  It is an understatement to say that driving regulations over there are 'relaxed'.  I am going to be honest here... there ARE NO driving rules and regulations - at least not practiced.  We spent a bit of time there and let's just say I was on the verge of a heart attack every time we ventured out onto the highway.  The craziest thing I witnessed is that when you come to a 4-way stop, it's not the first car there that gets to proceed first.  Rather, it's the BIGGEST car that gets to plow ahead.  Highlander vs Mini?  Well, you do the math!  Let's just say that the driver of the Mini is likely to get to work a tad late.

And my husband has brought his rather aggressive driving tendencies to good old Canada... and it makes me crazy.  My imaginary break is in constant motion.  My arms are insistently tense from grabbing the side, inside handle of the door.  And my stomach hurts from the nausea of sudden accelerations and then breaking.  Darn, in my case, it's the driver that's the problem, not the passenger! But please don't tell him I told you all this - he thinks he's angelic behind the wheel :).