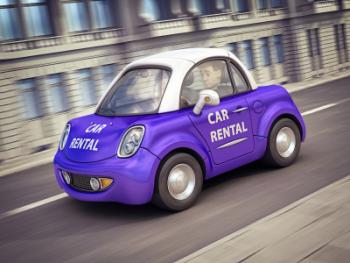 Is the in-city car2go service that is now operating in many cities world-wide going to wipe out traditional cheap car rentals as we know them?  I don't think so, but they are a cool concept nonetheless.

I read an interesting article in the National Post which boasts the many advantages of this relatively new service.  For those of you who aren't up to speed with this new phenomenon, car2go allows people to 'rent' a vehicle, last minute without having to go to traditional agency reservation counters.  Members pay a fee for their membership card that lets them pick up Smart Cars in designated parking lots.  They swipe the card, get in the vehicle, turn on the ignition and they're off!

Sure - this is a great alternative to taking the bus when you're in a pinch or don't feel like walking the 6 km to get to your office and to the meeting for which you are already late.  The cost is relatively reasonable and you don't have to pay for parking which can become extrememly costly is most cities.  It is also an environmentally-friendly alternative to renting a gas guzzling SUV.

But the reality remains that many people want to find the best car rental deal so that they can have a vehicle to 'call their own' for anywhere from a day to a week to a month.  While the car2go Smart Cars are good for hourly (or daily, max) rentals, it doesn't make economic sense to rent these vehicles for longer periods of time.  It would simply get too costly.  Plus, they aren't overly practical vehicles for groups, families, vacations or SEO's wanting something upscale.

So, while the car2go service is a snappy way to get from point A to point B in a pinch, I don't think traditional car rental deals and cheap car rentals will be left in the dust.