Trip
to Romania: What to do in Bucharest and Targu Mures

After a 3 hour flight from Israel to Romania and a few minor issues going through customs (not worth detailing here), I picked up my cheap car rental and drove into the beautiful city of Bucharest. First off, it's cold here! I am coming from +18 degree celsius weather, so the -4 or so is a bit overwhelming. Good thing I packed my Canadian parka, scarf, hat, and long-johns. But nevermind the cold, there is so much to see and do here so I really can't complain.

Bucharest is the capital of and largest city in Romania. It is Romania's commercial, cultural, financial and industrial center. It is located in the southeast part of the country, right on the banks of the Dambovita River, less than 60 km north of the Bulgarian border and the Danube River.

There are many amazing landmark buildings and monuments here. I have decided to park my cheap car rental somewhere central and hit the Palace of the Parliament. This building was built in the 1980's and is the largest parliament building in the world. It was built during the reign of Communist Dictator Nicolae Ceausescu. The palace is home to the Romanian Parliament and the National Museum of Contemporary Art. There is a massive convention center on premises - which is actually one of the largest in the world.

Since I won't need to stress about finding parking for my cheap car rental I will be at ease to take public transit to various other landmarks. Other great places to visit include (but are definitely not limited to): House of the Spark, the National Museum of Romania, the Military Museum, the Natural History Museum and the Museum of the Romanian Peasant.

I am afraid I am not staying at this luxurious hotel, however, if you really feel like living it up, it is highly recommended to book a room at The Intercontinental Bucharest. This 5-star high rise is located close to University Square. Each room boasts a balcony and a panoramic view of the city. On the main level of the hotel is the cozy Corso Brasseria which has an elegant glass wall overlooking the main boulevard.

After my stay in Bucharest, I am heading straight to Targu Mures which is about 350 km away via my cheap car rental. Targu Mures is located in central Transylvania (yes, where Dacula is supposedly from!). Tourist attractions include the Center of the city, the Central Square (also called the Rose Square) where there are numerous secessionist, neoclassical and Baroque buildings. Unfortunately, I am not here when the roses in Rose Square are in bloom which is in the spring/summer. That said, if you can make it here at this time of the year you will be amazed (from what I hear) at the beauty.

There are many places of worship in Targu Mures. For example, the Reformed Fortress Church is the oldest church here. One of the most emblematic Baroque churches of Transylvania, this iconic building was built in the 18th century. The St. John the Baptist Church is located in the northeast part of the city center and is owned by the Roman Catholic parish. The inside of the church is absolutely amazing, boasting artistical ritual objects. In 1898 the stained glass windows made by the Turke Company of Grottau were built.

Of much interest to me is The Big Synagogue which was built between 1899 and 1900. This synagogue was considered to be one of the most beautiful Jewish places of prayer during the Austro-Hungarian Empire. The huge interior of the building is elegantly decorated with beautiful shapes and colors. There are 314 seats on the main floor and 238 on the top. In 2000, the building went through a major remodeling at which time the interior decoration was redone and the walls were reinforced.

Other sights that can't be missed in Targu Mures include a massive fortress built in 1492; the Teleki-Boljai Library which is both a public library and a museum - it is home to one of the richest Transylvanian collections of cultural artifacts; the Old City Hall; The Cultural Palace and Theater Square. 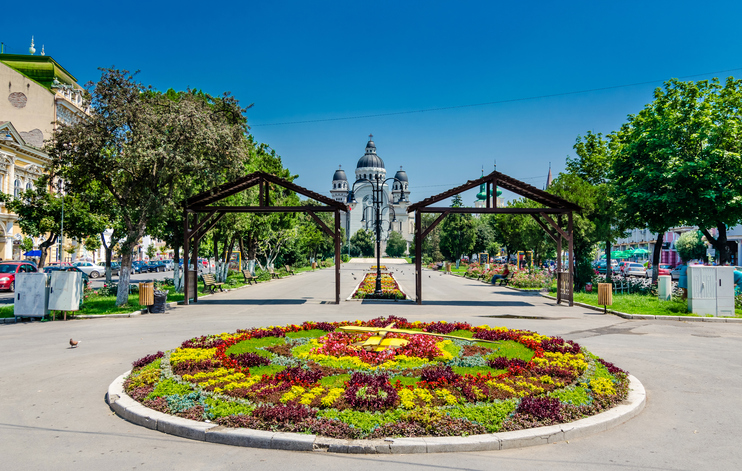