Toxic
Air on Flights - Rent A Car Instead 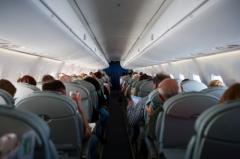 If you have a fear of flying don't click on the above link.  And I don’t mean fearful of flying for the obvious reasons like being in an aircraft that runs out of fuel and plummets into the Atlantic or being held up at gunpoint by a terrorist threatening to blow up the plane. This fear that I am talking about is something completely different... I am referring to toxic air on flights.

Have you ever heard of Tricresyl Phosphates? If not, don't worry, neither had I. Apparently TCP's (the abbreviated version) are used on aircraft as an oil additive to prevent engine wear. That's all fine and dandy but guess what? TCP's are chemically similar to pesticides... not so good! And it gets worse – as outside air is brought into an aircraft via a fanning system, fumes from the oil additive can infiltrate the air in the cabin.

The article continues to explain that exposure to TCP's over an extended period of time can lead to acute traumatic brain injury. This is most commonly apparent in pilots who have been flying for 10 + years. One pilot interviewed explained that he had memory loss, problems concentrating, loss of speech, and 'brain fog' – he thought that he had altzheimers.

Now don't go and cancel your family vacation to Cancun quite yet... it is still questionable how often TCP's contaminate cabin air and according to research already done, by the looks of things it is pretty infrequent. There is a current study taking place on this exact subject in Europe.

That said, do keep this blog in mind when you are planning your next vacation... perhaps renting a car and staying clear of the TCP-skies is a wiser option.