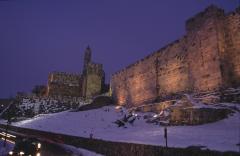 Looks pretty, doesn't it? You have never gazed upon true beauty until you've witnessed the holy city of Jerusalem all glittery in the snow. The mix of golden architecture mixed with the white snowy gloss is truly breathtaking and as long as you are able to kick back and admire from the comfort of your apartment/hotel/dorm window all is perfect... perfect, that is, until you have to go somewhere!

I am Canadian, through and through. I have experienced all sorts of Canadian winters, which have included snow, hail, sleet and negative temperatures that have reached 50 degrees. We Canadians are prepared for anything with our North Face arctic gear, down filled full-length coats, toques, earmuffs and long underwear. Not only do we have the proper clothing to cope with such extreme cold temperatures but also, more to the point, we have a transportation system that allows us to maneuver through streets filled with snow, ice and slush. All hail to the snow removal system!

But back to my story and allow me to set the stage: It's mid-December in Jerusalem. I am a student at the Hebrew University who has had an extremely hectic day full of lectures, researching in the library and writing term papers. It is finally time for me to head home to my shared apartment in the centre of Jerusalem where I am eagerly looking forward to my hot cup of tea and snuggling on the couch with a warm blanket. After packing up my books I leisurely glance out the window – there are fierce gray clouds in the sky and snowflakes are starting to fall. The University is all abuzz in anticipation of a snowfall (remember, Israelis are not used to seeing snow as are we Canadians) while I am annoyed at the havoc this could cause. Yes, I am a party pooper but hey, can you blame me considering that snow has been as commonplace in my life as hummus is to an Israeli?

I head down to the University bus loop and board my bus destined to drop me on Yaffo Street, where I live. On average, this ride takes 25 minutes, plus or minus depending on traffic.

As soon as the bus leaves the loop the snow starts to fall, and I mean really fall. Everyone sitting beside me is oohing and ahhing behind the frost-covered windows. For anyone who has been to Jerusalem they know 2 things: 1. It's not flat; 2. Many of the streets are old and narrow. Put this all together and add snow to the mix and what do you get? I will let you do the 'math'...

You will not be surprised to learn that as the snow progressed and the streets became more and more slippery the bus didn’t stand a fighting chance. We went from traveling 50 km/hr to 3 km/hr from when we left the university to the halfway point to my stop. And this took at least 2 hours.

Finally, at the peak of an incline, the bus stopped... By this time I was cussing like a you know what, cursing the Jerusalem transit system for not being able to handle what amounted to 45 minutes of snow. I mean, come on people, what’s the big deal? I continued to sit while the bus continued to sit idle. Despite the cold I could see bullets of sweat dripping from the driver's temples. The Israelis have endured years of war and daily threats of being bombed. Yet, despite this, they have managed to survive and build a solid and thriving county. However once you throw some snow into the mix all turns to chaos.

Finally, after my last iota of patience has run out I disembark the bus and proceed to walk the slippery streets (and may I add, for dramatic value, that I was NOT wearing boots!). Another hour and a half later I finally reach my apartment building, soaked through and with frozen toes, and climb 4 flights of stairs. When I open my apartment door I am greeted by 4 Israeli friends who are jumping and dancing with glee as they stare out the window. As soon as they see me they say, "Yay, you are finally home, what took you so long? We have been waiting for you to join us in a snow ball fight."

I will let you guess what my reaction was...